Here’s something to try in your Mothership campaign: invert Stress and call it Calm. In vanilla Mothership, Stress starts at 0 and goes up indefinitely as PCs encounter scary stuff. When something happens that triggers Panic, players try and roll 2d10 over their Stress. On failure, they must roll 2d10+Stress on a Panic Effects table and take the (usually disastrous) result.

Calm instead maxes out at 85% (like the other stats and saves) and goes down to 0%. Every time you would gain Stress in Mothership, instead lose that amount of Calm. Panic checks now have you roll d100 under against your current Calm (like the other stats and saves): if you fail, you look up the number you rolled on the new Panic Effects table below. A few things this change does:

Sounds good? Here’s how it works: if you have to make a Panic check, roll d100 under your Calm stat:

If you already have the effect in question, stack it! (This may mean increasing the length of an effect, increasing the Calm penalty, etc.) If it doesn’t make sense to stack it, move to the next highest entry and give them that effect instead. For example, “Social Anxiety” would stack so that the character loses 2d10 Calm whenever they converse with someone new, then 3d10, etc.

Switching to a d100 system calls for a few additional changes:

There is now a Calm version of my campaign character sheet.

Conditions are italicized. List these on your character sheet. If a condition does not have a listed duration, it is permanent. A condition may be removed upon leveling up (PSG 36.1) or possibly through other means as determined by the Warden. (Some entries are taken from or closely based on the original Panic Table in the PSG.)

Update (2021-05-14): @Amputret on the Mothership Discord has created an excellent Android Calm Table based on the table above for use with Androids specifically.

Switching to the Calm system means that the overall distribution of Panics is going to be different. Here’s a chart showing a character’s chance to experience each possible type of effect when called upon to make a Panic Check using Mothership’s Stress system with 0 Resolve: 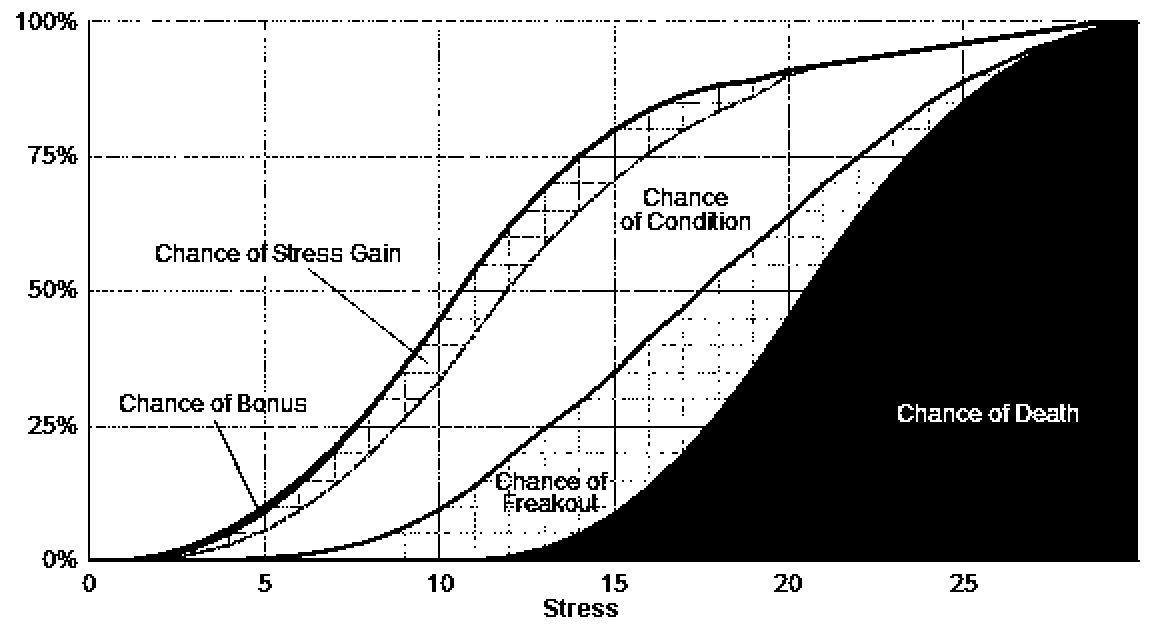 Note that the probabilities described incorporate both the initial 2d10-over-Stress roll to determine if the player panics, and the subsequent 2d10+Stress Panic Table roll on failure. Some interesting takeaways from this breakdown:

Here’s a chart showing the same thing, but with this Calm system. It’s a bit more boring as a chart:

Same categories as above, but also:

Probable Death: as Death but with a slim chance to survive

Worse than Death: as Death but with additional effects My hunch is Stress is probably the better system for one-shots and mini-campaigns, and Calm may be better suited for longer campaigns, as Stress ramps up and becomes lethal much faster (on average, assuming 1d10 Stress gain / Calm loss, you’re going to have a roughly 50% chance of death when making a Panic Check after gaining Stress 4 times vs. losing Calm 13 times.) We’ve been playing with this system for a while in the Warped Campaign and it seems to work well.